Posted at 13:15h in General, Leadership by Andrea Schumann

Cheryl Boone Isaacs, recently retired president of the Academy of Motion Picture Arts and Sciences, was the driving force behind many changes in Hollywood—including the academy’s diversification 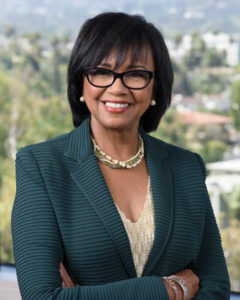 When Cheryl Boone Isaacs was trying to launch a career in publicity in Hollywood in the 1970s, she would cold-call studios. When she would tell them her name to set up an appointment, the person on the other end of the line invariably would say, “Oh, are you one of Pat Boone’s daughters?”

“Then I would show up and get a long second look,” says Boone Isaacs, who is African American. “There just wasn’t much diversity in Hollywood in those days.”

Today, Hollywood is a more diverse industry, in part because of the efforts of Boone Isaacs, who in 2017 stepped down after four years as president of the Academy of Motion Picture Arts and Sciences. She was its first African American president in its 90-year history and only its third woman. Former presidents include Hollywood royalty such as Gregory Peck, Douglas Fairbanks, Bette Davis, and Frank Capra.

Boone Isaacs, who has a long and distinguished career in Hollywood in publicity and marketing, made changing the hidebound nature of the academy one of her priorities, starting with diversification of the more than 6,500 members. When she became president in 2013, the membership was 93 percent white and 76 percent male. In 2016, in part as a response to the #OscarsSoWhite backlash, Boone Isaacs kicked into high gear an initiative called A2020 (which had already been in the works) with the goal of significantly increasing the representation of women and people of color in the 17 branches of the academy by 2020. So far the initiative is slowly and steadily working—from 2015 to 2017 the percentage of women in the academy increased from 25 percent to 28 percent, and the percentage of people of color grew from 8 percent to 13 percent.

“Cheryl played a huge role in changing both the numbers and the culture of the academy,” says Reginald Hudlin, a film producer and director and former president of entertainment for BET. “She had to manage some of the toughest transitions in the history of the academy—every couple of decades the institution has to reinvent itself to make sure it is relevant for the next generation. Cheryl did that with her efforts around diversity of the academy—which was not easy, as it is very challenging to make changes with a group of very successful people who think things are fine just as they are.”

Legendary studio executive Sherry Lansing, who was the beneficiary of Boone Isaacs’s publicity work on several films when she ran Paramount, says that the changes Boone Isaacs implemented at the academy may represent the pinnacle of her career.

I’ve known Cheryl Boone Isaacs for over 30 years,” says Lansing. “As a producer and, later, as chair of Paramount, I saw firsthand how brilliant Cheryl was at her job. But perhaps Cheryl’s most impressive achievement to date was her leadership of the academy. She deftly steered the organization through a period of highly visible challenges and helped solidify its future as a far more diverse and forward-thinking cultural institution.”

Overcoming obstacles against heavy odds is nothing new for Boone Isaacs. She was raised by her parents to view obstacles as challenges and opportunities for growth.

Boone Isaacs, who grew up in a middle-class family in Springfield, Massachusetts, was the youngest of four in a tight family. Her father was a postal worker and her mother a stay-at-home mom.

Her life changed when she was a junior in high school, and her sister moved to California to get married.

“When we were out there, and there was no humidity, no mosquitoes, and no thunderstorms, I immediately thought, ‘I got to come here,’” says Boone Isaacs. “In my senior year of high school there was a late spring snowstorm, and I said to myself, ‘I can’t do this one more minute.’”
She moved to Southern California to attend Whittier College. She knew no one in California except her sister.

“Later in life, I realized that I like throwing myself in the deep end,” she says.

After graduation Boone Isaacs turned her attention to the film industry. Her older brother Ashley Boone Jr. was already entrenched as a successful motion picture marketing and distribution executive, but she was determined to make her way on her own and didn’t use his name in the early stages of her career.

Her first job was as a publicist for Columbia Pictures, promoting Steven Spielberg’s Close Encounters of the Third Kind. It was the first of several movies she would publicize for Spielberg, including the Indiana Jones series.

“I was such a little pisher, standing in the corner scared to death!” she says. “I was out there, knocking on doors. It was very intimidating, especially as a black woman. There just was not much diversity in Hollywood back then.”

Sometimes she was so upset by the slights that she would go home and cry in the shower. That became an indicator.

“One of my rules was the minute I cried in the shower, I needed to look for another job,” she says. “And let me tell you, it happened more than once.”

Despite some tear-drenched showers, her career took off. Boone Isaacs became executive vice president of worldwide publicity for Paramount Pictures, where she was responsible for orchestrating the publicity campaigns for Best Picture Oscar winners Forrest Gump and Braveheart.

She later was hired as president of theatrical marketing for New Line Cinema, overseeing the box office success of films such as Austin Powers: The Spy Who Shagged Me, and Rush Hour.

Hudlin, who first worked with Boone Isaacs in 1992 when he was the director of the Eddie Murphy vehicle Boomerang, a film she was in charge of promoting, says he knew right away that she had what it took to succeed in the cutthroat world of Hollywood.

“Paramount in that era was legendary, and she fit in with that team of hard-charging, high-powered executives,” he says. “She was very impressive. Boomerang was a big summer movie, and Eddie Murphy was an important asset for the company. She always handled things smoothly, she was always in control, there was no drama, no panic, in whatever Cheryl was involved in. She had a grip on what to do and how to do it. So when she became head of the academy, I was not surprised at all—it made so much sense.”

Reflecting back, Boone Isaacs says she can’t choose a favorite director to work for, or actor to help promote. Perhaps it’s her politic, careful nature—which served her well as the head of the academy.
However, some projects do stand out, she says. “Naturally, Braveheart and Forrest Gump were special because they won Best Picture. Forrest Gump was probably the most challenging film I ever had to promote. Think about it. If you see this title—Forrest Gump—what does that mean? How do you sell that to a broad audience?”

Boone Isaacs has been a member of the public relations branch of the academy since 1987, and an elected member on its board of governors for 20 years. When she was encouraged by her fellow board members to run for president in 2013, she initially dismissed the idea. Then she thought, “Why not me?”

The academy thought the same. That year, she was elected to the first of four one-year terms. She had a full agenda, starting with diversifying the academy. As the academy gently nudges the motion picture industry, the more diverse its 17 branches will become and the more likely that more films will feature diverse casts and directors, and accordingly they will be nominated for the top awards. Perhaps even more important, a more diverse academy means that members are recommending and hiring talented diverse cinematographers, directors, editors, and publicists—broadening the diversity of the industry as a whole.

“The academy plays a leadership role in the industry, so changing the academy meant changing the industry,” says Hudlin. “[By pushing for diversity] Cheryl was reminding members that we are not passively voting on what are the best movies—which is the public perception of what we do—but our real role is to set an example on how the industry must change to reflect society.”

Boone Isaacs decided that one way to increase academy diversity was by increasing the number of people invited to become members. In 2016 alone, it invited a record 683 people to join its ranks, more than doubling the number who were invited the previous year. The new invitees were 46 percent women and 41 percent people of color.

“My goal in terms of diversifying the 17 branches of the academy was bringing in new talent,” says Boone Isaacs. “That meant convincing each of the 17 branches to examine their criteria and expand who is recruited to apply for membership. We asked each of the branches to look around for new talent in its particular areas, and it worked.”
Small steps, but in an industry that has traditionally been resistant to change, these numbers are meaningful, says Boone Isaacs. And change takes time—2016 was the same year that the #OscarSoWhite campaign broke out, as all of that year’s Academy Award actor and actress nominees were white.

The diversification was only one of Boone Isaacs’s many priorities. She presided over the groundbreaking in 2016 of the Academy Museum of Motion Pictures, slated to open in 2019. She also oversaw the launch of the Gold Talent Development and Inclusion Program, a hands-on, educational internship program for aspiring young film talent interested not only in acting and directing, but in other aspects of filmmaking.

“I am particularly interested in bringing young people into the visual form of the art form,” she says. “Visual effects, animation, and related fields are exploding, and traditionally white male dominated. One of the goals of the program is to increase access to women and people of color to these career paths.”

Now that she is retired from the academy, Boone Isaacs would like to be one of those players who increases Hollywood’s diversity directly. She would like to dive into the storytelling side of the business, as a producer.

“I am very interested in stories about people and their relationships to different cultures,” she says. “I would have loved to have made Lion or Hidden Figures. Films that teach an audience about something they may not have thought about, films that bring humanity to conflicts. We are all human beings. We are the same. I want to be part of entertaining stories that bring that to light.” DW